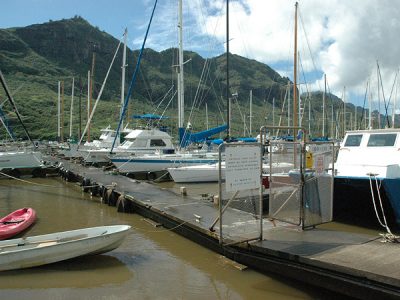 This morning a small tsunami struck Kauai. The maximum change in water level seems to have been about 4 to 5 feet at Nawiliwili Small Boat Harbor. There was no major damage or injuries caused by the tsunami. 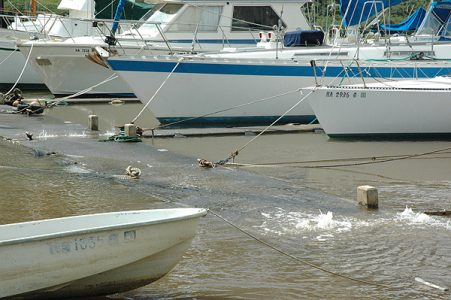 At 11:00 am when I arrived at Nawiliwili I was surprised to see that the tsunami was not over. The water was still coming in and going out with a period of about 10 min and a height of about two feet. There were many tales of excitement from the boaters who were around for the biggest waves. Fortunately this was a small tsunami and there was a lot of excitement and little destruction. 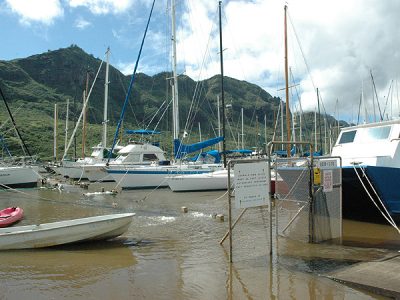 If you do not know a tsunami was formerly known as a tidal wave. Scientists did not like that name because they felt that it would be confused with the tides, which are waves with long periods. The tides are caused by the effects of the Moon and the Sun. They are very predictable and follow a repeating pattern. Tsunamis are also known as seismic sea waves. They are created by seismic events in the ocean. They are about as predictable as lottery numbers. Seismic sea wave is probably a little tough on the general public so they decided to call them a tsunami. This is Japanese for a tidal wave. It really means a harbor wave. They are the destructive waves that can destroy harbors. They do come in much like a tide but with much shorter periods. Today's was about 10 min. between crests. 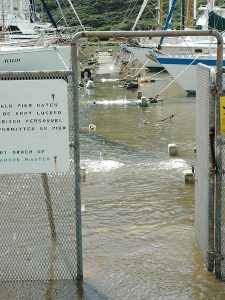 The earthquake causing it was near the Kuril Islands North of Japan at 1:14 am HST. The largest waves hit Nawiliwili at about 8:35 am. There had been a Tsunami advisory but it had been canceled at about 5:30 am. It was canceled because small waves had been reported from Hokkaido (about a foot) and Alaska (about 8 inches).

The height of tsunami waves can vary greatly from place to place. With neighboring areas sometimes experiencing great differences in wave height. Sometimes distant areas will experience bigger waves than nearby areas. In 1960 there was a very strong earthquake off of Chile. Waves were estimated at about 80 feet at Chile. This set off many warnings in Hawaii which had several destructive tsunamis in its recent past. When this wave reached Tahiti it was reported to have only been a few feet. Many people hearing this went back to their homes in Hilo. When the waves did reach Hawaii they were up to 35 feet in Hilo many people were killed.
« Go to "A trip around K…"
Go to "Whale Tails" »