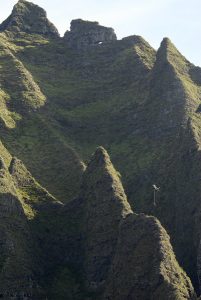 Sunday March 30. I spotted a helicopter towing something orange underneath. I thought that it was a water bucket but someone with binoculars said that it was a person.

It was flying high on the ridge above Kalalau Beach. They looked like they were searching for something. We watched as we drove by wondering what they were looking for. I did get some pictures although I wasn't sure what I was looking for. 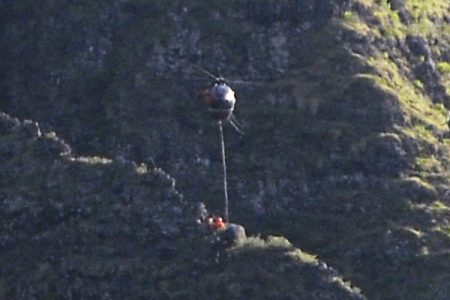 The next day I read in the Garden Island that it had been two hikers. They were picked up and brought to the beach. I am guessing that is where they started from. 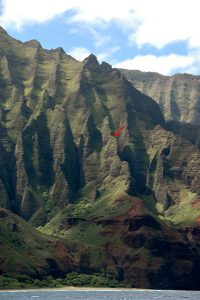 Many times I am asked if people climb the cliffs of the Napali. The answer is that the cliffs are not good for climbing. There is much loose rock making them very dangerous no matter how good a climber you are. The rock can give way or fall on you. In spite of this people do climb the cliffs. Some are rescued, as in this case, putting the rescue workers in danger themselves. Even with a helicopter it is very dangerous to rescue people. Many places are too steep to get a helicopter in the wind is often strong and gusty especially near the ridges that they have to pick people off of. Some people fall, some are just never heard from again, and some do make it. The cliffs are very unforgiving.

The Hawaiians say that there were trails up the cliffs around the island a long time ago. They are long gone now. I often look at the cliffs and try to imagine were the trails might have gone. I have no intention of trying to climb them though. They are not safe to climb or even to stand too close to the edge or the bottom of them.

4-6-2008 I learned some new information about this rescue from someone who was at Kalalau at the time.
The two were called Hollywood because they were working on a documentary video. That morning a Monk seal had come up on Kalalau Beach to rest. They spent much time watching the seal. They decided that it was a sign that they should climb to the hole at the top of the cliff. The people at Kalalau told them that that was not a good idea.

They climbs toward the hole and got very far up the cliff. Eventually they called for help with their satellite phone. The helicopter rescued them and brought them back to the beach. The rescuers would not let them bring their backpack back with them. Afterwards all they were thinking of was how to get back up the cliff and get their backpack with their phone and video camera inside. 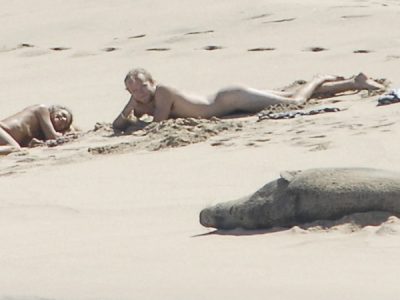