With all of the talk about the Super Blue Blood Lunar Eclipse, I couldn't wait to get a good nights sleep. I had no plans of getting up to see it. 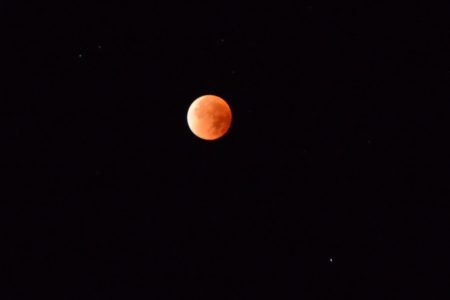 From a sound sleep I was awakened to see the Moon.  I thought about just going back to sleep but since I was awake I went out to take a look.  It was pretty bright red so I started to take pictures. 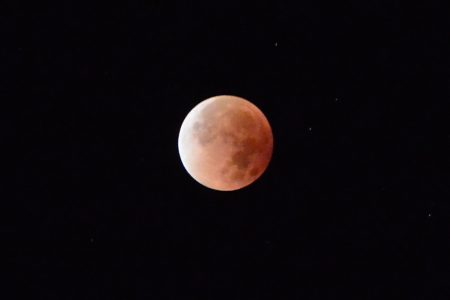 It is hard to make it look impressive but I did what I could. 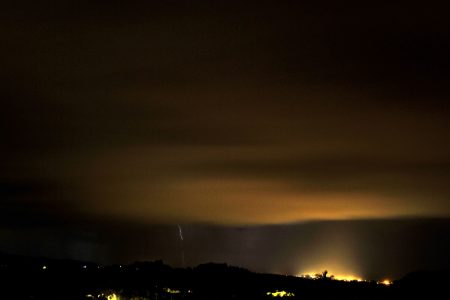 There was a bit of a storm going through at the time also. Here you can see the light of Poipu glowing on the clouds. The clouds also hid the moon for much of the time. 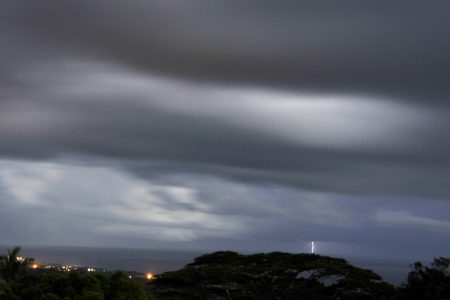 I think that the lightning show was better than the moon.  The lightning was distant and I was not seeing bolts or hearing much thunder. Just flashes in the clouds. 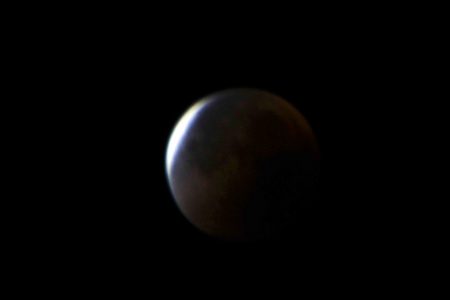 The moon eventually started to come back. 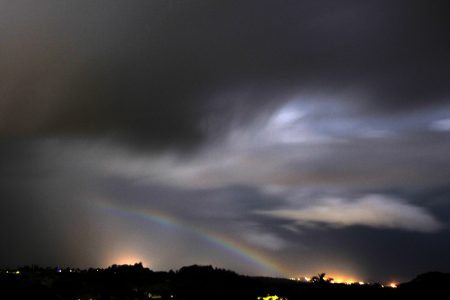 When the moon came back I was hoping for some moonbows.  I never did see any but I was able to photograph one. 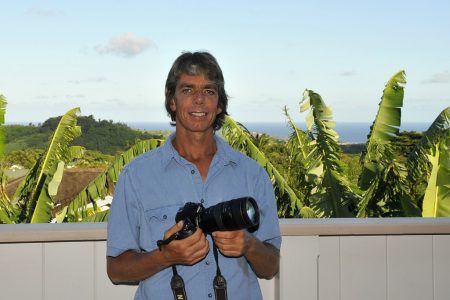 The Japanese TV Show Chikyu Zekkei Kikou filmed an episode over here. The name roughly translates to Journeys to Earths beautiful places. The episode on Kauai was A Garden Floating in the Pacific. Here is a link to their site.
http://w3.bs-tbs.co.jp/zekkei/detail65.html
It was on the air on 7-29-2011. 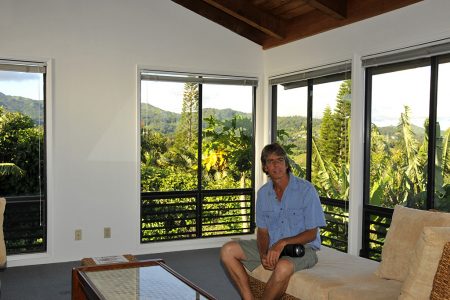 Of course they had to get me. I started out at Glass Sand Beach. Not really my number one choice of a beautiful spot. It got better as I drove her to my house. The narrator was not actually here or even seen on the show.

She thumbed through my photo album to find a beautiful spot to visit. She chose the Napali Coast. Much better than Glass Sand in my opinion at least. After that I promised to show it to her the next day. I wave goodbye as she drives away. 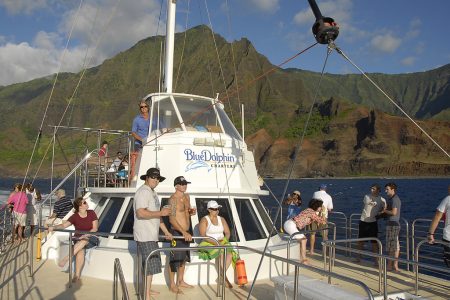 The next day she arrives at the boat to discover that I am not only an incredible photographer but also an incredible boat captain too. 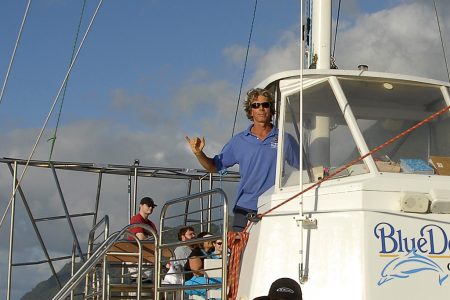 The weather was good. The dolphins put on a pretty good show. It was March when they filmed and the whales were here. They even got some whale breach pictures. 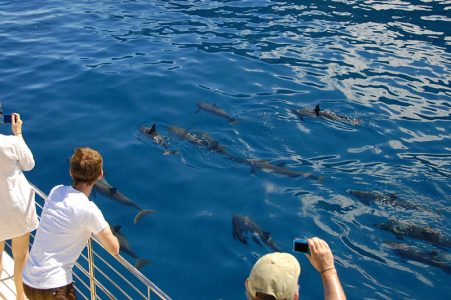 We snorkeled at Makole. The water was clear. They got a shot of me diving in to get the mooring. They had a sea turtle on the surface. They even had her get into the water and snorkel. The yellow nenue that no one ever believes turned yellow swam around in front of the camera. 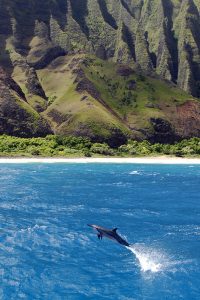 At the end of the trip she watched the sunset. Now that was a long trip. There was a green flash that I took a picture of. Later they asked for a better one. I ended up taking another one and they used that. the trick is to underexpose it so the color doesn't get washed out. 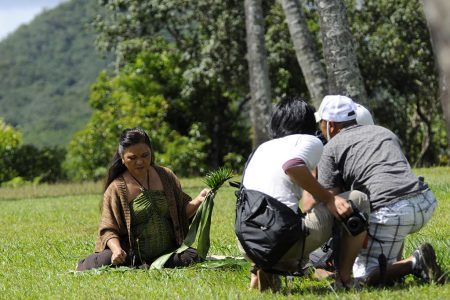 She went into the forest and picked ferns for a leipoo. She then made the leipoo. 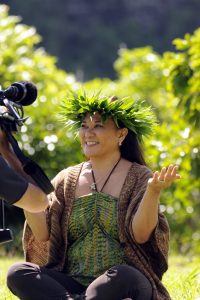 After the leipoo was made she was off to hula practice. 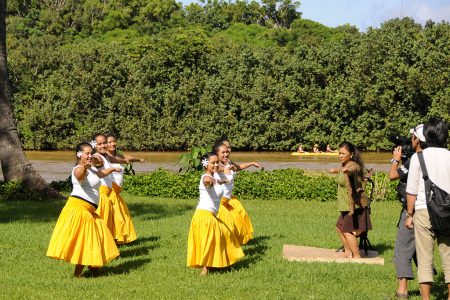 Hula practice was on the banks of the Wailua River. The river was a nice brown color due to some heavy rains but fortunately it was nice and sunny for the filming. 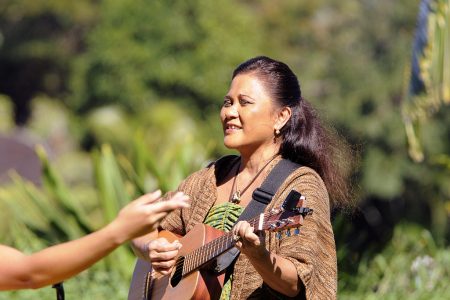 They don't usually get dressed up and practice along the Wailua River so don't go there looking for them. 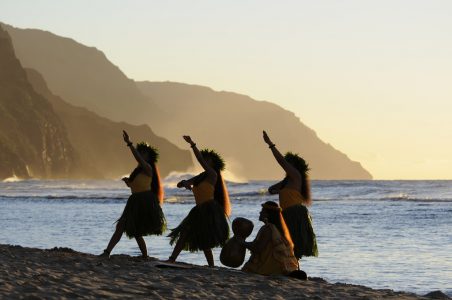 They also filmed the Smith's Boats and the Fern Grotto.
Kayaking on the Hanalei River with Harley from Kayak Kauai. Harley also took them to Polihale to look for sunrise shells. It was raining over there too and the road was a bit muddy. 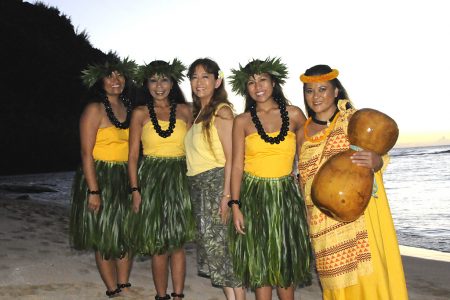 The end of the show was at Kee with Leilani again. She chanted and the girls danced into the sunset. 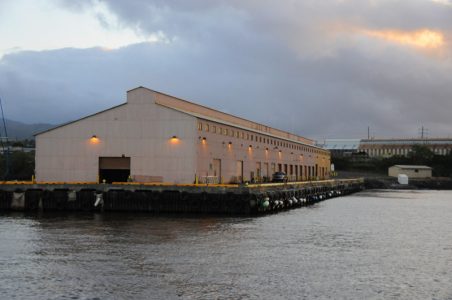 Yesterday there was a very big earthquake in Japan.
This resulted in a devastating tsunami in Japan.
The wave was expected to reach Kauai at about 3:00 am this morning. We met at Port Allen at 1:30 am to get the boats out of the Harbor. The largest waves came by in the night. 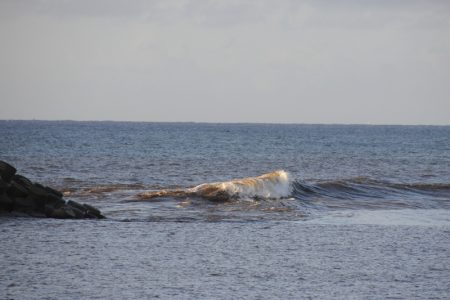 In the morning there was still some surging of the harbor.

Here the water rushing out of Port Allen creates a standing wave by the breakwater. Soon it would stop and then rush back in. 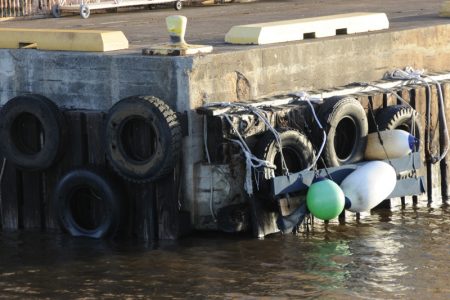 Here is what the corner of the pier looked like with high water. 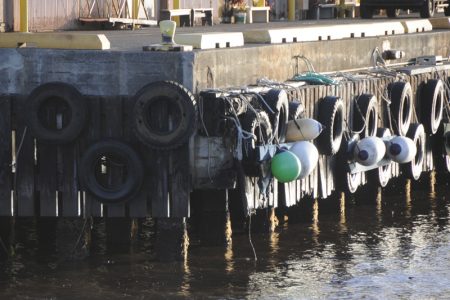 Four minutes later this is the same corner of the pier. 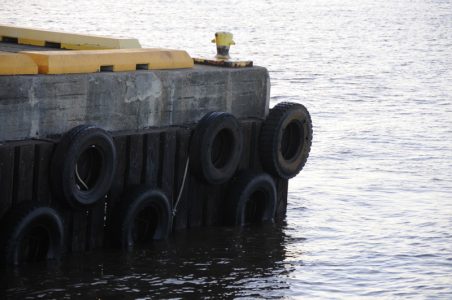 Same corner with about the highest water level that I saw. 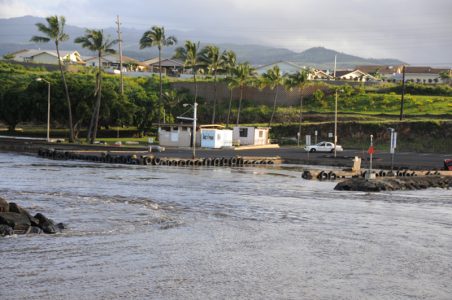 Here is the small boat harbor at Port Allen. The water is flooding it.
During the night I heard that the water was flooding the parking lot where the police car is. 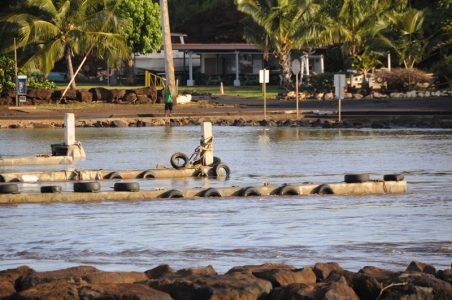 Here is the small boat harbor with high water. 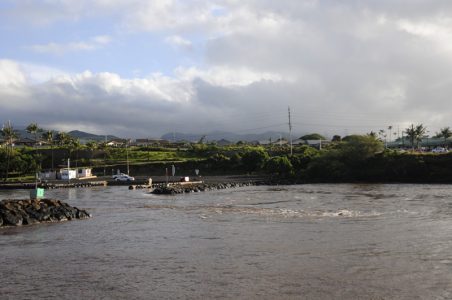 The water drains from the small boat harbor. 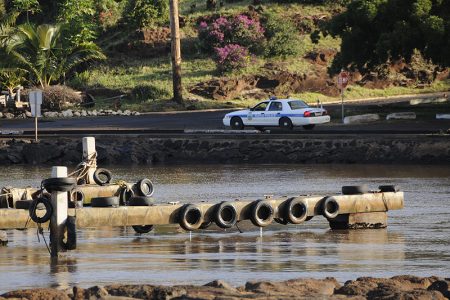 This is the same finger pier about 2 minutes after high water.

Fortunately for Hawaii this Tsunami did not do much damage here.
It did continue across the California where waves up to 6 feet were reported in California.